I started earning my own money at fifteen by milking cows. From there, my farm relief empire grew and instead of getting shit on by my boss, I was getting shit on by my minions with increasing regularity. The hours were miserable, the work was hard, and I had an ingrained smell of shit under my skin. Sweating would trigger this pungent odour release like a mangled Glade Sense and Spray. My social life had to be managed meticulously and it was many the herd of cows that felt the wrath of one of my more raging hangovers. I was also trying to juggle working on the family farm, pulling calves in the pitch dark and putting in silage at all hours of the night. I lasted at this for eleven months before I actually found my worst job ever. 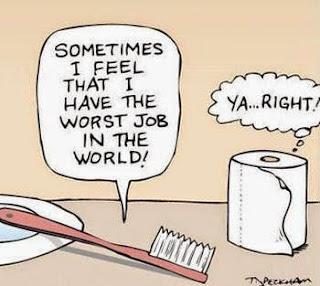 When I moved to America, I had visa conditions I thought I needed to satisfy and so started looking for work "in my field." If this was a literal field, it would comprise of about 4,000 acres of barren, rocky land in Connemara that even the Bull McCabe would fail to make arable. I could dip my toe in the pools of Economics, Sociology, Politics, and Law but (as in real life) I would sink to the bottom due to my lack of buoyancy.

I applied for unpaid internships and hoped that my winning smile and can-do attitude (I possess neither of those attributes) would see my way into a full time position. I got accepted for one such "internship" before I even left home - an online writing gig but still - Success! I also got an interview  shortly after arriving in the US. I was on my way to living the elusive American Dream. It was a grassroots organization that stood up to various powerful interests and my boss was younger than me. At 22 I was far too old to be an intern but pickings were pretty slim for them too it seemed. I was "hired". All I had to do was bring my own laptop, work two days a week and not get paid.

I spent days endlessly trawling the internet for useless information that they already had or didn't need and other days annoying journalists on the phone trying to get them to publish our press releases. This was where my fear of cold-calling really manifested itself. It was pretty soul destroying work but I saw it as my best lead for full time employment. After a couple of months I asked if there was any suitable job openings. It turned out they were having a big group interview session that very weekend and I was invited along.

Needless to say I was an absurdly poor candidate and wasn't hired. The interview was largely based around organizing protests and town hall meetings and other things I thought I had aspirations to but had been lying to myself about. It was suggested that I could try working at the fund raising department instead. "It's not for everyone" they said "but there can be good money in it."

To the best of my recollection, I didn't need an interview. I just needed to fill out some paperwork and come back around 2pm the next day to learn my lines. The new recruits (there were three of us that particular day) were given a sheet of paper with a paragraph on it.


Hi my name is Joe and I am with x organization. Did you know that we in Massachusetts have some of the cleanest drinking water in the entire country? Well this comes from the x reservoir. Did you know... something pollution...logging etc".

I've repressed much of it at this point but was rhyming it off in my nightmares for months to come.

We set off at 3pm that first day, me and a group of strange people, all of whom knew each other well and ignored me for the most part. I was to shadow a girl the first day as she knocked on doors, spoke her piece and collected money. She had a daily goal of around $150. If she failed to meet that goal three times, she would be fired.

My goal for that first night was $20 which sounded very reasonable over the course of 8 hours. It is important to remember that it was December in New England and I was not used to - nor was I dressed for - the weather. After a couple of hours traipsing door to door my bones were coated in frost and my lips looked like they had been pressed against a belt sander. Thankfully I didn't have to do any work for the first few houses but after that we had to take turns and the girl would critique me.

I was clearly terrible because after a few hours we came to a house where a woman was getting ready for an expensive night out and paid us to go away. The girl chalked that up as my $20 for the night and told me I didn't have to talk again.

Some people told us to go away, or that they didn't care, or did we not see the sign that says no soliciting? One of the other two new guys wandered off mid way through the evening and never returned. I was told this as a by-the-way later on as this was apparently very common. Back at the office that night, the token black guy was late getting back. Some one had seen him in their driveway earlier in the day and called the police. This had delayed him and he had trouble hitting his target because of it.

I went back for day two and this time I was on my own but would have a mentor who would be checking in on me to make sure I was doing ok. I had "my turf" (I would have been far more comfortable turning it in the bog) and told to knock on as many doors as possible. When I had a partner the night before, I was forced to go to each door. Now that I was on my own, I started to shit my pants. I was alone and scared and assumed that every door I knocked on would have a murderer behind it or, even worse, someone who would be mean to me.

For a lot of houses, I sat outside without knocking before marking off my sheet as "no one home" or "not interested" and moving on. I was most definitely not the one who knocks but I knew I would have to knock on a few doors. I started with some houses with a donation history, stuttering and stammering through my lines as if I was trying to read them off a soggy, crumpled piece of paper in my mind. This didn't inspire much confidence in people as to the worthiness of our cause and so I got many the door slammed in my face.

One woman told me she had recently lost her job and couldn't afford to eat. I was trained to counter this with "Anything at all that you could spare would make a huge difference" but I muttered a heartfelt and embarrassed apology and scuttled away. That one knocked my courage to knock on another door for a while. Each time I prayed that no one would answer and purposefully picked houses with the lights off.

My mentor checked in with me via text. I told her I was doing ok - a lie. I was almost at the point of tears, the loneliness being the hardest part of it all. I looked at my list of previous donors and picked one in an apartment building. I was told the trick here was to ring all the doors until someone let you in and then knock on all the doors once inside. I hated and thoroughly disagreed with this plan but my joints were frozen to the point of seizing, my lips were openly seeping blood from the blistering craters, and I was wandering aimlessly in the dark.

I buzzed my prospective donor and started speaking my lines through the speaker, thanking him for his past donation and wondering if he would like to honor us again. He was an old man, hard of hearing and probably finding my accent incomprehensible so he let me in. I got to his apartment and he was standing in the hallway, easily 85 years of age, in his pajama pants and shirtless, squinting and confused as to who I was and what I might want. I had to shout quite loudly so that he could hear and it took a good number of minutes before he understood.

Apparently his wife had donated previously. She now suffered from dementia and didn't know who she was. He was taking care of her. His every word dripped with an inner pain and anguish and what the fuck are you doing here? I noped the fuck out of there, apologizing all the way to the elevator. There was no way I was staying in that building knocking on other doors. Meanwhile my mentor had been blowing up my phone wondering how I was doing. I finally got back to her (following a good cry for myself) to let her know it was going shittily. We met up and she took me by the hand for the rest of the night.

Watching her, I couldn't help but be impressed but also re-enforced in my opinion that this was something that I could never ever do. She'd get a door slammed in her face, smile, take two steps to the left, and knock on the very next door. I would take my turn every so often but stopped shortly after a potential benefactor schooled me on the name of the reservoir I was trying to save. Back at the office, my mentor didn't even put up a fight when I told her I probably wouldn't be coming back the next day. That was the day I decided that changing the world probably wasn't for me.
Email Post