The Wedding: The Day Itself

There is little to say about this day that can't be done by videos and photos. That doesn't mean I'm not going to jot down a couple thousand words anyway.

I got up at seven and made my way down the road to take a walk around the farm, partly to make sure everything still looked the same, but mostly to clear my head and work off some of the nervous excitement that had been building. I didn't get too far as I was waylaid by my uncle Jack and brought in for a cup of tea and the mandatory "are you sure?" talk, complete with photos of weddings past.

After an hour, I headed home without the walk. It was time to start thinking about getting ready for the arrival of the lads. I had foolishly agreed to do an ice bucket challenge so there was that to get ready for. By the time I picked up breakfast and a bag of ice, the lads started to arrive. We stuffed our faces as if it was the last time we were going to eat that day and paused for the obligatory moment to think of the poor starving kids in Africa who wouldn't be able to share in the mountain of leftovers. 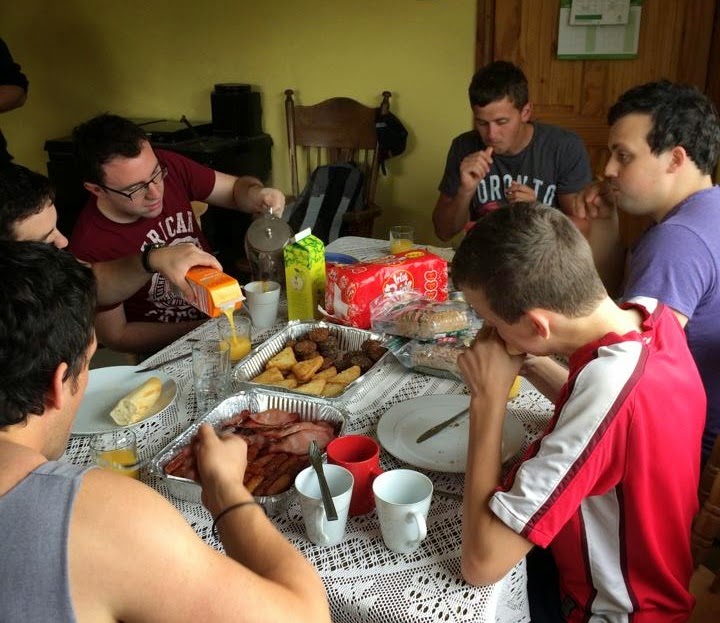 At that point, it was pretty much time for the ice bucket challenge, and as is typical of me, I needed to make a big splash. For this, I used a milk can and two (apparently) strapping young lads (who should be) at the peak of their physicality. Unfortunately, they were not and I risked concussion on the morning of my wedding due to their mishandling. Pigeons.

Following on from this, there was very little distraction and nerves began to settle in. Beers were cracked open and we sat around trying to decide when the last possible minute would be to start getting dressed. The level of disorganization was on a par with the announcement of an imminent nuclear explosion. It was absolute bedlam with lads suddenly forgetting how to tie ties and never knowing how to properly fold pocket squares. Consistently Underwhelmed Sweeney introduced an element of calm into the situation in the form of a bottle of Jagermeister and time seemed to slow down for everyone. We took some pictures and made our way to the church. 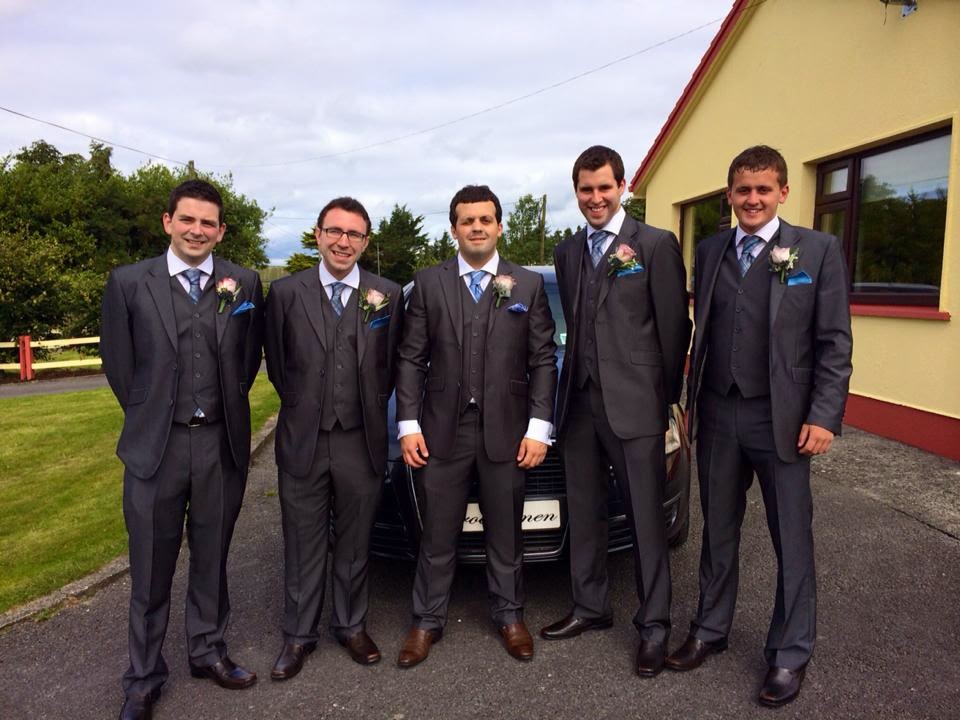 I arrived at the church far earlier than I had any need to and my groomsmen started to disappear from around me when I needed them most. Dooley and Eddie had gone to pick up the rings and were taking their sweet time about it [1]. Anto was running around asking questions about what he had to do as he had missed the rehearsal, and just as they had all arrived back, Alan burst through the side door sans suit-jacket and beckoned Eddie as if there was a calf coming backwards outside on the church lawn. [2]

Time flew and even though I got there at 12.30, it was suddenly 12.57 and the church was absolutely empty. Had I the ability to control my own rectum at that point, I would have been squeezing a large, rigid brick out into my new suit pants. There was murmurings from the four people assembled in the church, probably wondering why the fuck I had dragged them here when there clearly wasn't going to be a wedding. All of a sudden, there was a massive influx of people as if the doors to Best Buy had just been opened on Black Friday.

Word reached the front of the church that all was well and that the bride was outside getting more pictures taken (because the two hours at the house beforehand weren't enough). I began to breath again but found myself getting very tempestuous. I was glad in that moment that I wasn't a woman as I wouldn't be able to handle this range of emotions every month. I knew there would be a camera on me which didn't help. I wanted to look like the happiest of grooms - and I was - but it was all I could do to keep from crying.

I kept looking from my feet, to the back door, back to my feet again. They were a fantastic pair of shoes I was wearing. Fuck it, I wonder if there's stickers on the bottoms, I thought. This was an immediate concern of mine at this moment. The lump in my throat had developed a lump in its throat as the bridesmaids were making their way down the aisle and there was a pause at the back of the church. The music adjusted and all of a sudden there was an angel in our midst. She floated down the aisle as my eyes filled to bursting with unbidden tears. 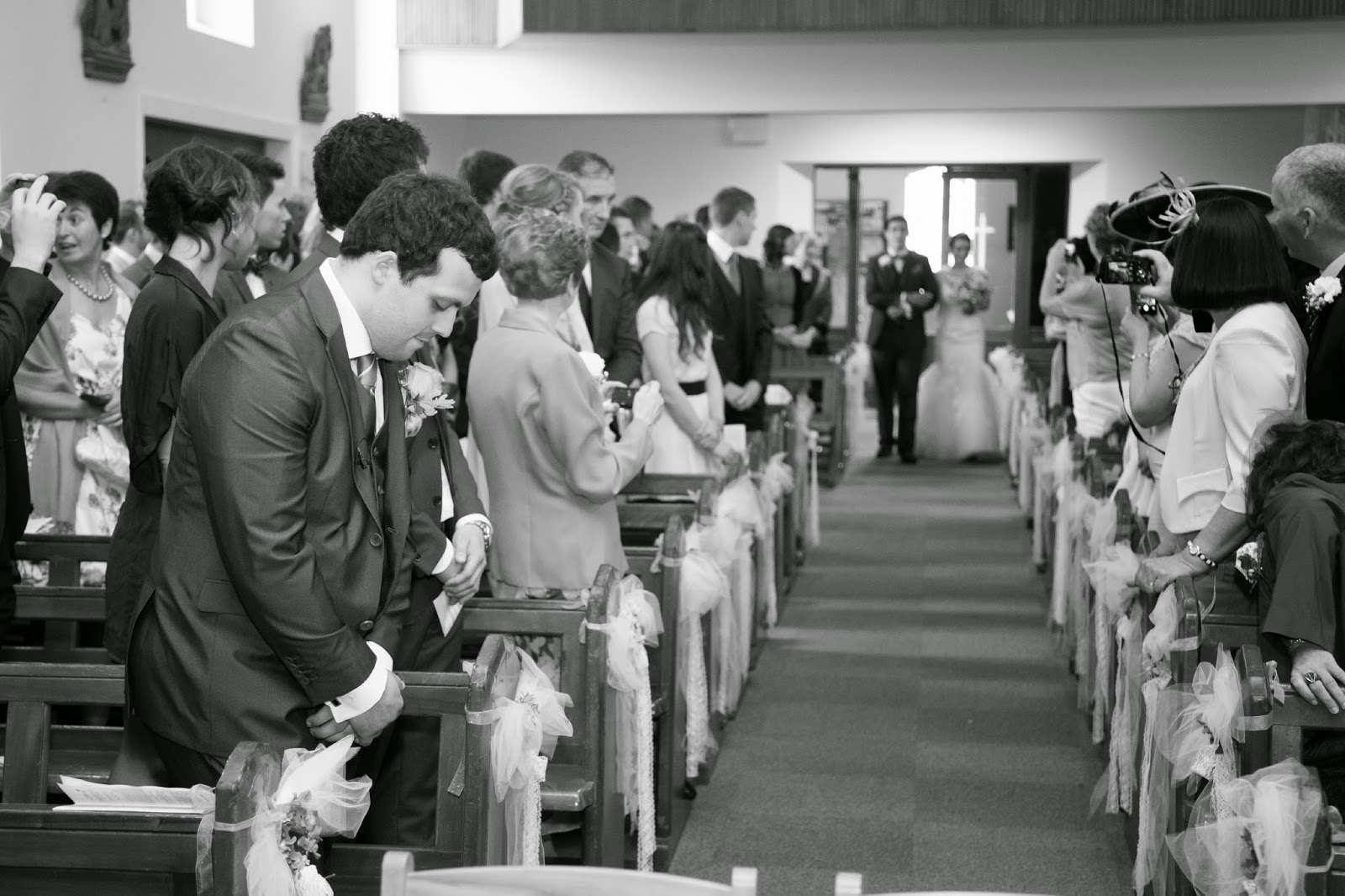 Through sheer force of will and brute masculinity, I managed to force them back down the tear ducts from whence they came in time to give Matthew the loudest bro hug you're likely to hear outside a college frat house welcoming new pledges and I greeted my bride. She looked nothing like I imagined she would and yet more stunning than I could possibly comprehend. It was impossible to take in all my emotions at the time as everything was happening so fast but this was the moment of my life.

The rest of the mass went by in a bit of a blur (if only every mass was like that). I managed to make it through my vows unprompted, unlike Christina who did an uncanny impression of me saying mine at the rehearsal. Aside from the whole promising-myself-to-one-person-for-life and worrying about the entire church seeing the stickers on the soles of my shoes each time I knelt down, the highlight of the mass was the priests conversation with Eddie. To Eddie? At Eddie? It was a very one sided conversation where the priest, having done some research since the rehearsal, now had Eddie's family tree memorized and knew everyone in Achill that he had ever met or could possibly be related to.[3]

After the receiving line outside the church, we noticed chewing gum stuck to Christina's dress. I let the bridesmaids deal with that and enjoyed some champagne. We went down the road to take some pictures in a field. We had been worried about this during the week as we didn't know whose field it was to ask for permission. As we were waiting to get started with the pictures, a cyclist (presumably the owner) passed and said "Ah Jaysus, if I knew this was happening I would have topped the feckin' thing"[4] and continued on cycling, chuckling to himself. 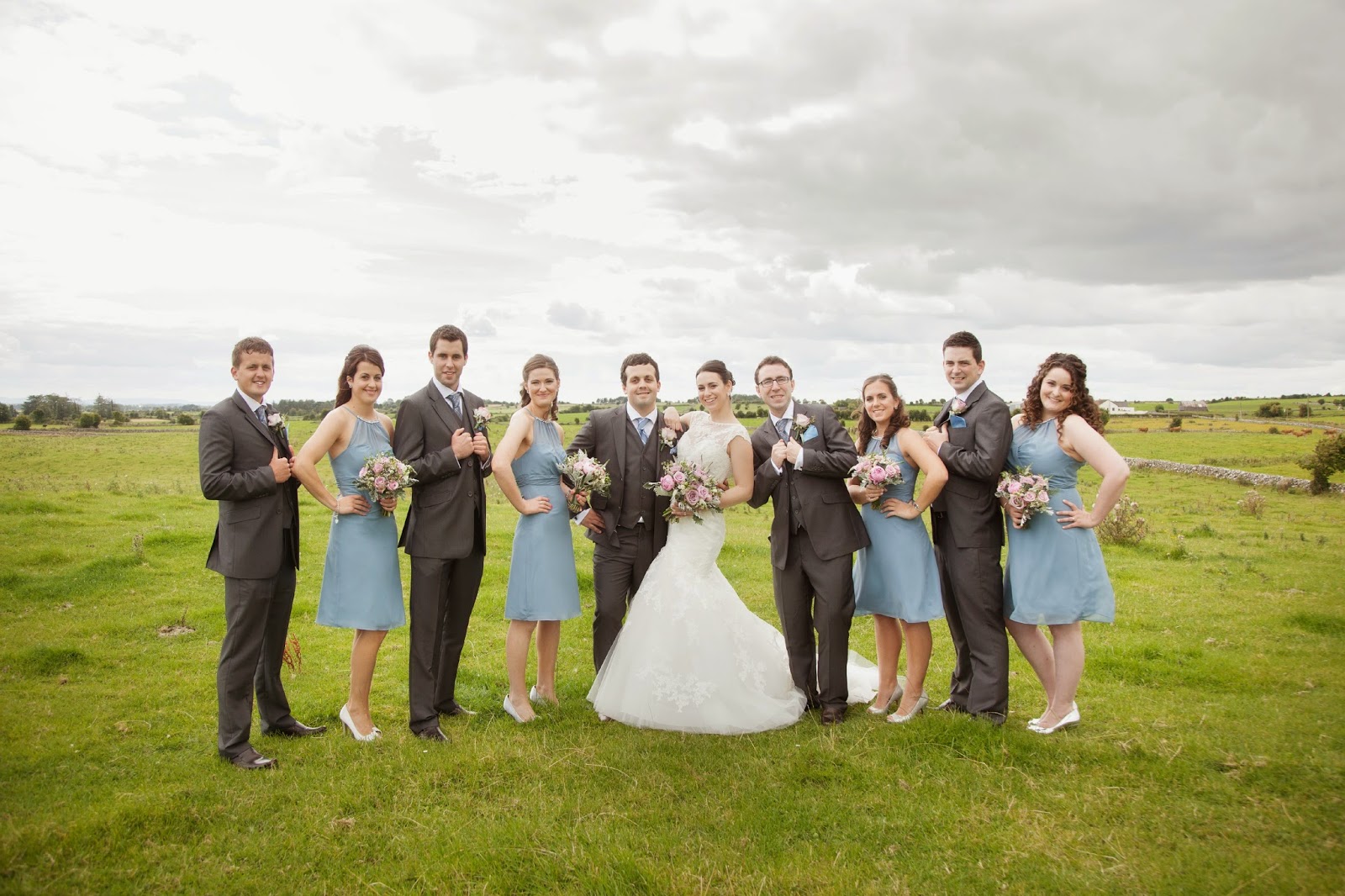 When all was done here, we were driven in style around the village of Monivea (complete with GoPro in front) with horns blaring, bonfires blazing, and drinkers lazing outside the pub, including many wedding attendees. Our next stop was the Claddagh/Spanish Arch area to take some more photos. I loved the days I had spent drink here during college but I had never been so happy in that place as I was on that day. I talked to an American woman there. She was from Boston and her sister was married in Wakefield by our local priest. Small world indeed. Eddie's father bought us all Cornettos which, for some reason, were perfect for that moment. I reminded Christina of a line in a Bell X1 song about her being "the chocolate at the end of my Cornetto" which was a mistake because I got to eat both Cornettos but only the end of one.

Following another photo shoot in a park close to the hotel which seemed to go on for ages and gave the groomsmen some great moments (see below), we were finally ready to make our grand entrance to the hotel. I was worried that with only 180-ish people, our wedding was going to look small in the hotel. When we got a glimpse in the doors, that fear was completely allayed. There was - and I believe this is the correct group term - a shitload of people crammed into the hotel reception, whooping and hollering. 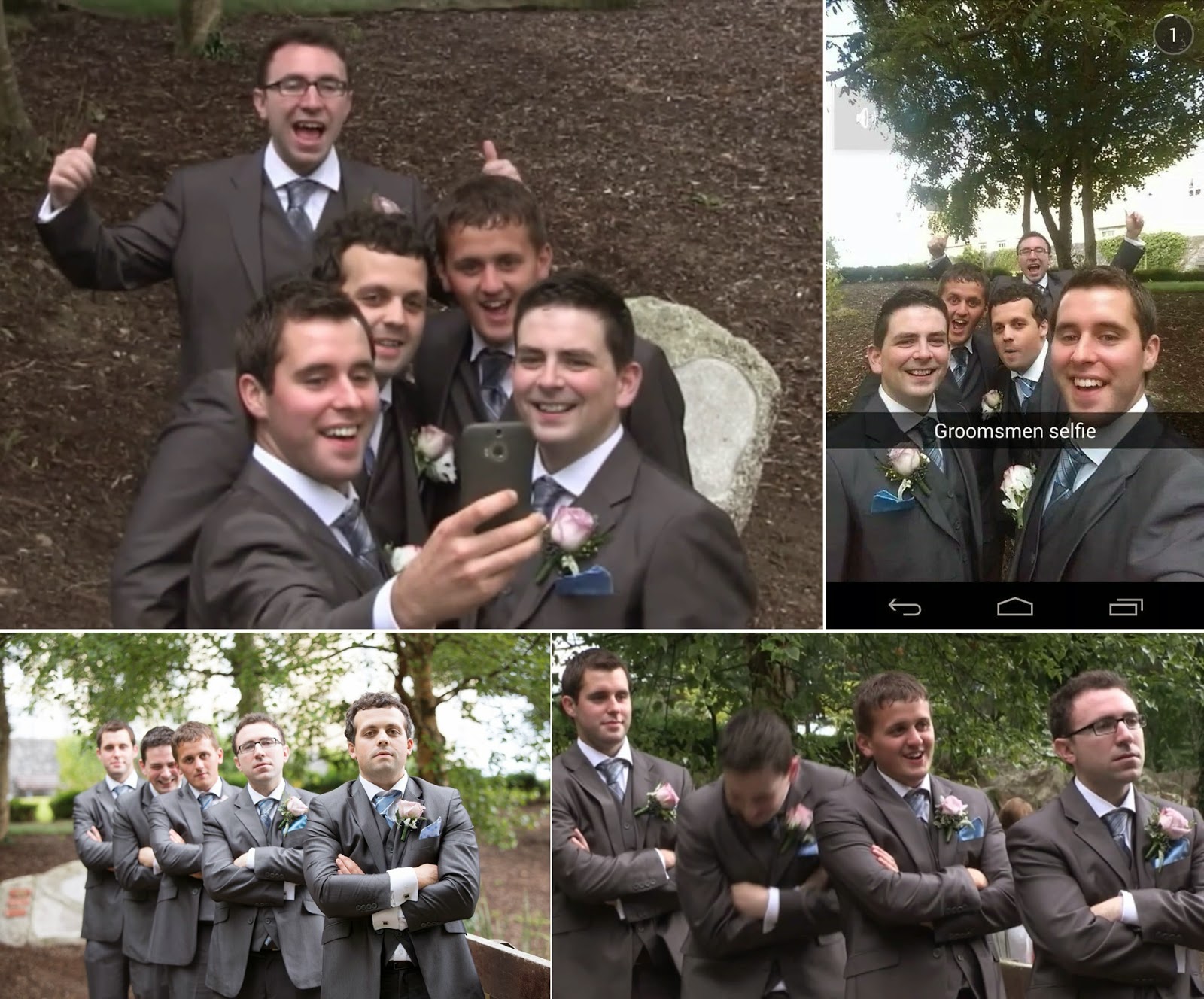 When we finally got to sit down to the meal, I was very excited. I had been warning people for months not to sleep on the turkey and ham and I wasn't disappointed. I was also not disappointed by the wine service. Not being a huge fan of wine, I hadn't expected to drink much of it but the Galway Bay clearly scoured the city's colleges for that one friend who makes all his other friends drink more just by his sheer persuasiveness and gave him the job as wine server at the top table for weddings. There was a point before the speeches when I thought I'd had enough. I relayed this to him. He stood there and stared at me, through me, into my soul and gave an almost imperceptible nod of his afro-laden head as if to say "Go on, you deserve this, you need this, you paid for this." After that, I just let him have his way with my wine glass.

During the meal, Pat came over to me to ask a few questions for his speech. He had a business card in his hand and on the back was written "Welcome Christina into D. family." Nothing else. When he left, having asked his questions, he had written no more on the card so I knew his speech wouldn't be up to much. He stood up and spoke for a solid 15 minutes. He couldn't have torn the arse out of his speech any more if he took it into the showers in Mountjoy and force-ably inserted a pool cue into it. People loved it and were in stitches throughout. I can only hope to attain that level of comfort in front of a crowd some day. 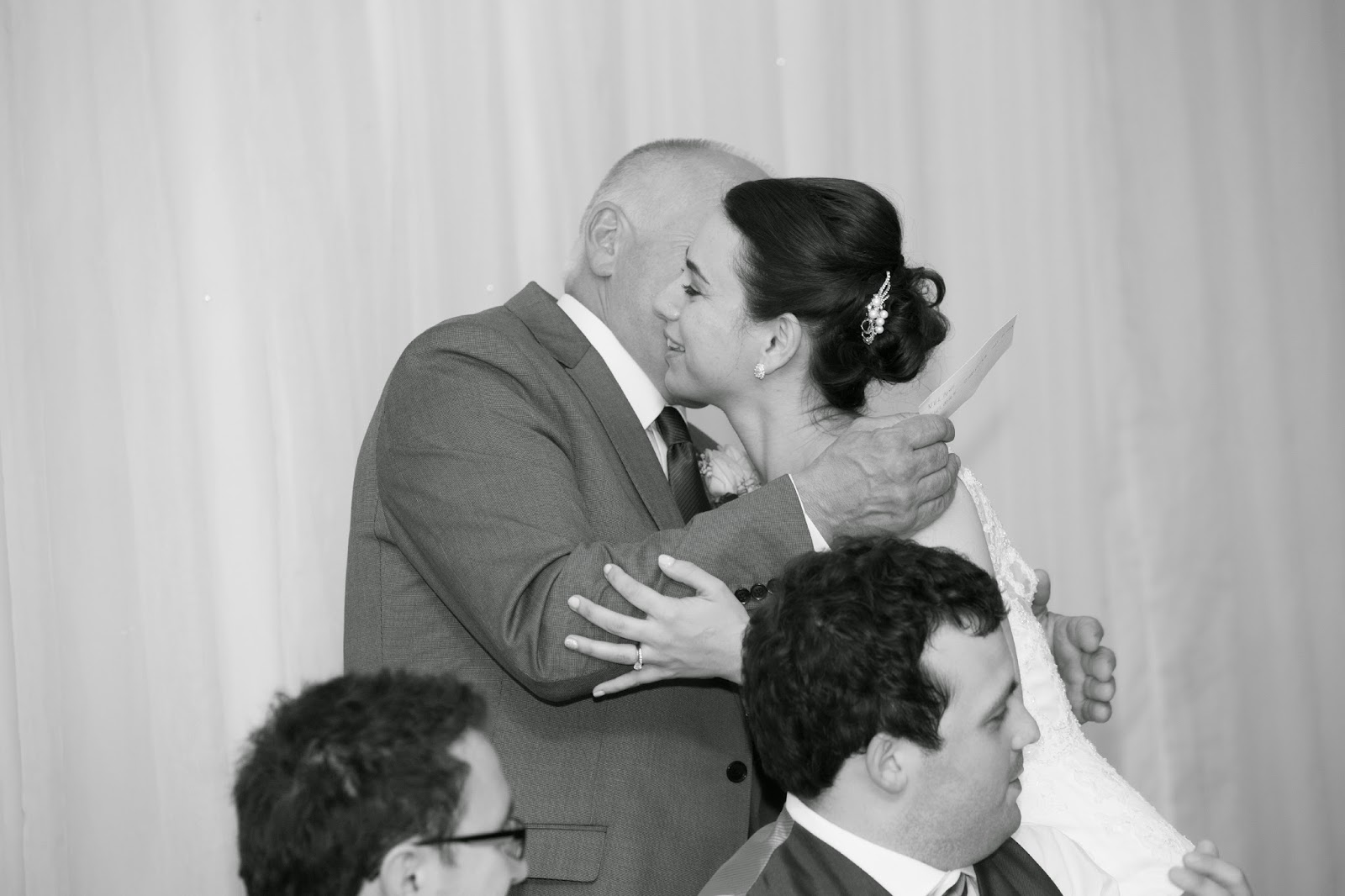 It did put me somewhat at ease for my speech as I knew that I would no longer be the longest one of the day. We all did an immaculate job of saying our pieces and it was almost time to start enjoying our night - but not until we were harassed for more photos. I felt more like Kim Kardashian on that day than on any other. I've always had my massive arse, constant need for attention, lack of discernible talent, and sex tape with a semi-famous black man, but the sheer volume of photos I was wanted for was unprecedented.

The first dance came next and this was something I was also dreading as I can't dance to save my life. I'm not sure when I would ever be put in that situation but if I was, you can rest assured I'd come out of it in a box. Mere seconds into the song, I beckoned the bridal party to fill the floor to save me from the embarrassment and managed to enjoy the rest of the song. At this point the cameras were turned off and so too will this blog post but needless to say it was a fantastic night.

More picture and video will be available here eventually.

[1] Eddie's mother got a flat tyre and they happened across her.
[2] Eddie had left the window open a crack in his car and it looked like it might rain.
[3] Eddie should have known all of these names that were being thrown at him and it would have made the conversation infinitely less awkward. I'm beginning to see a theme with these asterisks.
[4] American translation: Oh man, had I prior knowledge of this event, I would have had the landscapers in.