I would first like to thank Bridie and Matthew for welcoming me so readily into the family. It’s a special thing to be so welcomed so easily and so quickly into a family, whether it is the O’Connors or the Tamers. Even though I am not Bridie’s son, I heard reports that she was angrier than Christina that I prolonged my stag for an extra night. Since day one of being in America, they have treated me as a son and brother, sometime both simultaneously and I can only hope that I have repaid all of that. 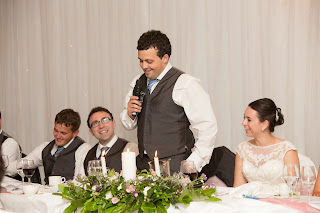 On the Monivea side of the family, I would just like to thank everyone at large for being so welcoming and kind. I still find it funny that I am able to walk in and out of any of the houses in Monivea at any time of the day or night and instead of batting an eyelid, whoever is there will flick the switch on the kettle instead. I have yet to see an extended family that are so close. I would especially like to single out Ger and Niamh here who we have been living with since we got here. Thank you both sincerely for welcoming us and for doing such a good job at pretending that we are no trouble at all. Thank you also for having a tactical baby around the place. I have noticed that when Fionn is around, tensions between the bride and her mother have dropped dramatically.

I want to thank my own family for raising me the way that they did. It certainly wasn’t a normal upbringing - Paul was going crazy last week because the television was broken in the house. He doesn’t remember the lengthy spells in the 90s and early 2000s that the tv spent in a wardrobe because Pateen Donnellan wasn’t getting enough work out of us on the farm. This work has clearly stood to all of us as a few men struggled to find someone to milk their cows this evening. I would also like to give serious kudos to my family for getting Ballinastack in good shape for the wedding events. It took a team effort to get the place looking good and they did some excellent work. Sometimes it just takes a wedding I guess. 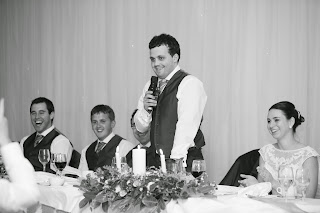 Our bridesmaids are at the table here today and are the model of poise, beauty, and grace (even Katherine). They have been so incredibly helpful in the wedding planning process, whether it was Tracy organising the cake and church flowers, Gemma helping out with the manual tasks and keeping the bride calm (a task that I am admittedly not capable of handling alone), Katherine cutting through the bullshit and giving solid advice as only a Donnellan can, or Jackie looking after the American side of things with the bridal shower and the bachelorette party. They are beautiful and wonderful people inside and out and we are very lucky to have them, not only today but in our pasts and long in to our future together. So Ladies and Gentlemen, if I could ask you to be upstanding and raise your glasses to our beautiful bridesmaids. 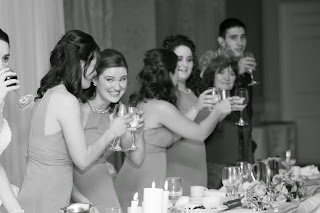 Many people were more than a little surprised when I told them Michael Dooley was to be my Best Man. That may have been because they had never heard me say his first name before but the more likely reason was because I had so many brothers to choose from. There were three reasons I picked Dooley. The first was down to his Jewish demeanour, I knew he would be the right man to trust with money. The second reason was because he was the link that first brought myself and Christina together. We were roommates in college and she came in to Galway to visit him. The first sentence I heard her utter was “Should I put my beag in the trunk?” I cringed. Oh God, how I cringed. Typical American I thought. But she wasn’t.

The rest of the lads were very supportive too when I told them that I felt something for her, having only met her a couple of time. Alan even stopped calling me a pussy after a couple of weeks. The final reason I picked Dooley was for his speech. The bar has been set so high for this speech that if he doesn’t channel his inner Martin Luther King crossed with Al Pacino in Any Given Sunday, it will be a spectacular failure. No pressure. His other option, which he has assured me he will not resort to, is to tell some fabricated stories that cast me in a not-so-great light and I can only assure everyone here that if any of them involve a shower or a guitar in a wardrobe, or Santa Ponsa. they are completely false. In fact any story involving alcohol is an outright lie as it is well known that I am not now and never really been a big drinker *take drink*. 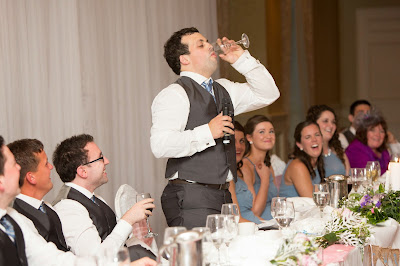 There are a number of thank yous I need to do here. These are people who helped out a lot in the background but have gotten no special attention. The first is Niamh O’Connor who has helped Christina so much with the stuff that I would have no idea about. She has always been so kind and willing to help - especially before we even knew we needed help ourselves. Martina has also helped us a lot with the church, flowers and introducing us to Fr Howley, who we would also like to extend a special thank you to. The staff her at the Galway Bay, especially those who we have had relationships with including Leona, Siobhan, Barbara, our wedding manager who has made sure the entire day has gone as smoothly as it has, and a special thank you to Pat Mannion who has no official part in our wedding day but who recognised a good Ballinastack man when she saw one and has been so kind and helpful every time we set foot in the hotel. To all of our friends and family who have travelled from America and elsewhere, we want to sincerely thank you. While you all seem to be having the time of your lives and assure us that we are doing you the favour, we are so happy that you could share this weekend with us. To anyone who played any part in looking after the “Yanks” while they are here, including chauffeurs, breakfast makers, or landladies, your help and kindness have been invaluable and we love you. I would also like to apologise to the people who I have forgotten until I sit down here and will kick myself when I realize later. I’ll buy each and every one of you a pint.

I was going to finish the speech on Dooley before handing over to him but I thought that might send the wrong message and get me in trouble on my first night of married life. So now I turn to my wife. I may be biased but does she not make the most beautiful bride you have ever seen? I have seen a glow in her in the run up to the wedding that reminded me of Yvaine in the movie Stardust. She shines like a star in my life every single day and I am so lucky to have her. I knew from very early on that there was something special about Christina. On the first occasion we met we kept locking eyes across the table in the college bar as Dooley and Hibbitt debated Irish history - and neither of us would look away. Despite all my perceived confidence, I was terrified of girls and this was totally alien to me. The choice as to whether long distance was worth it was a difficult one, but as I stand here today I know that we both made the right decision.

I now hand over to Christina who is far more economical with her words than me and if she proofread this speech, she would have cut it to under three minutes. Thank you all most sincerely again. 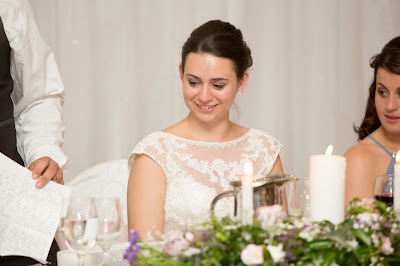