Planning the Wedding: The American Things

Living in America and marrying an American gave this wedding a whole new dimension, one that I had only ever seen satirized on television and in the movies. At least I thought it was satire until I lived it. 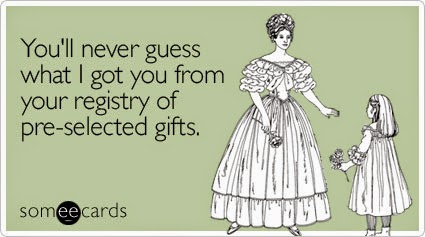 What is a registry, you ask? Well you know how people in Ireland give cash because it's easier for everyone? Well, in America, a country famed for making everything easier for all people (I'm pretty sure you can drive-thru all seven sacraments here), the guests and the couple themselves are given extra work. The couple pick some stores that they like the stuff in and then walk around with a little pricing gun. "Oh I like that... and that... and that" and before you know it, you've zapped 6 different types of spatula and are arguing over whether 12 champagne glasses is enough for the obnoxious number of guests you think you can entertain in your little 8th floor apartment.

Make no mistake about it, this is a lucrative business for the stores involved but it is also one of the big tests for a prospective marriage. Much like a relationship being able to survive its first trip to Ikea, if the soon-to-be bride and groom can come through the registry process relatively unscathed, it is sure to mean a long and happy life together. As the main cook in the house, it probably should have fallen to me to pick kitchen utensils (yes, it can go all the way from food processors to tea spoons) but I knew better than that. I would leave the command to Christina and be a good and loyal foot soldier (Yes dear. Gorgeous dear. That soup spoon excites me more than any of the others we've seen too, dear.)

Of course there is a downside to playing the lick-spittle. Your unfailing agreement is mistaken for apathy and apathy is treasonous when it comes to choosing the pattern on the towel you will be using to dry the dishes. There came a point in the registry shopping  where we realized that it wasn't worth risking our marriage by continuing this and completed our registries online. I should point out that people were incredibly generous and everything we got was very useful as we moved into a new apartment. I am glad that registering is a process we'll never have to repeat though. What? You have to do it for babies too? Oh, bollocks. 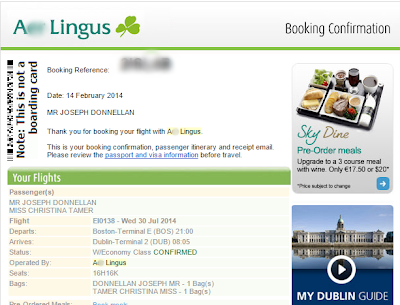 We had decided to have a destination wedding without thinking just how expensive flights might be. The answer, unsurprisingly, was fucking expensive. We knew it was definitely going to deplete the number of guests from the US. With that in mind, and given the fact that the brides mother is a travel agent, we were keeping an eye on flights every day and watching them go up and up.

Cut to Valentine's Day. I am sick at home wondering how I am going to be able to go out to dinner tonight but knowing it was my duty as a future husband to not start the endless string of crushing disappointments until after the honeymoon period. Bridie Skyped me from work to let me know that she's just been on the website of a prominent Irish airline, let's call it A. Lingus, and prices around the wedding had dropped significantly. So significantly that there had to be a glitch in the system. We booked right away (Yay! We were definitely able to attend our own wedding) and set about contacting potential guests to let them know it was go time. This is not a drill people! We didn't know how long this was going to last but we were hoping just long enough.

That night we sat across from each other at dinner in a lovely Italian restaurant in the North End. I was manflu-ing all over the restaurant as my lovely fiancee sat across from me with her head buried in her phone. To the casual observer, we looked like we were either fighting or just completely uncomfortable in each others company. I looked positively miserable and Christina appeared to be texting begging her friend to make the secret emergency phone call that meant she had to leave in a hurry. She was actually texting friends and family, helping them to book a wonderful trip to the most special day of our lives. This was the most exciting development since actually picking the hotel. And yet other couples around the restaurant were obnoxiously betting on whether our relationship would last the rest of the evening or not. SPOILER ALERT: It did. 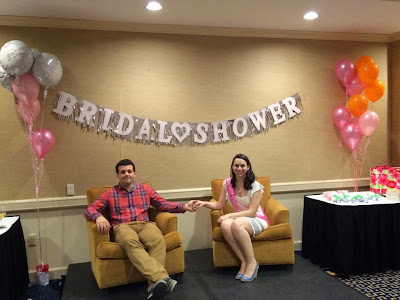 Not only do guests have to get presents off the registry for the wedding itself, they also have to shell out for a completely different event before the wedding that most of the females attend. The bridesmaids / mother-of-the-bride pay for it and the happy couple get to keep all the presents. It's one of these things that seems ass-backwards from the outside - created in the 50s so the wife-to-be could perform her wifely duties of making sandwiches and sweeping the floor - but makes a lot more sense when you're the one benefiting. It is called a Bridal shower for a reason but unfortunately I was marrying the type of girl who wanted me to be part of it.

Not knowing the etiquette as I had never been exposed to such a thing before, I was dubious. She was insistent, much like a stiff breeze to the flowery skirt of a incognisant cyclist crossing a bridge, and I was forced to relent somewhat. I would be there for the beginning to greet people and for the end to grab some food and thank everyone. As much as I tried to inform the bride of this, she chose to ignore me but this was her problem when I disappeared suddenly during the shower for two hours to watch the World Cup upstairs.

I arrived back just in time to have missed the opening of the presents. This is where all the women earn their acting chops, pretending to be excited and surprised by what comes out of each box (a bit like a Deal or No Deal minus Noel Edmond's loud shirts and flowery wisdom) even though they all trawled the registry days and weeks earlier trying to decide which to buy. I was present while the women dressed each other in toilet paper dresses but kept my head down in a number of superfluous cupcakes until it was over, posed for the obligatory pictures, and thanked everyone very much. To us, the shower was a chance for many of Christina's friends who were not able to make the wedding in Ireland to get together and wish her (and us) all the best and for that reason it was lovely. Much like Noel Edmond's aforementioned shirts, I can't help but think the tradition is a little outdated.