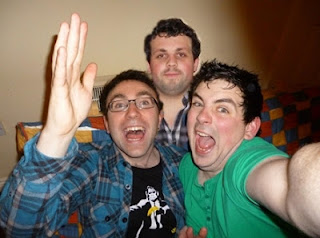 The three boys were going to O'Connell's for one after mild success in the Grand National. They had no plan for the day except to see where it would take them from here. Upon entering through the sacred door, Eddie had a thought, one he half-shared with only Dooley, "I've never had anything other than a pint of Guinness in this place," he said before scampering off to the toilet to admire his gigantic schlong. Dooley and Joe had a  socially awkward penguin outside before retreating back inside.

Joe, sidestepping a man with an armful of glasses, made his way to the bar and ordered. He forgot about Eddie, who was clearly jerking off as he still hadn't returned. Dooley had mulled it over in his mind whether or not he should get Eddie a pint before seeking Joe's counsel. Joe said to get him one to fuck but Dooley explained to him how it wasn't that simple. He told him what Eddie had said about the Guinness. Eddie had been on Bulmers before this and it was unlikely he would want to switch to Guinness but he had said that was all he had ever drank in O'Connell's. Dooley was in such a pickle that he decided to let Eddie get his own drink.

There was too much going on in Joe's life right then to worry about this. He received his pint just as Eddie returned and managed to sidestep the barman for the second time before shouting to the lads that he would make his way outside. Before Dooley even got a chance to ask Eddie if it was Guinness or Bulmers he wanted, his phone rang. It was Johnny. Eddie managed to sneak in his order, a pint bottle of Bulmers, before Dooley's pint of Guinness had time to settle. He promptly paid his money and scampered off outside to meet Joe.

Meanwhile, Dooley's phone conversation began with Johnny asking him "Where are you exactly?" which immediately got Dooley's spidey senses tingling. He looked around to make sure Johnny wasn't behind him before deciding that he must be outside with Joe. He pretended to be none the wiser as he watched the bemused barman looking for someone to give change to. Dooley was too busy trying to mind fuck Johnny but in the back of his mind he was wondering if it might be Joe's change. Eddie grew impatient after he got his pint and disappeared outside too. Dooley was still no clearer as to where Johnny and the rest of the gang were and so hung up.

It was at  this point Eddie's barman returned with a fistful of change and a look of sheer befuddlement on his face. He looked at Dooley. "What's... what.... is this a tip?" He could come to no other conclusion as to why he was standing there holding forty five odd euro of change from a five euro pint. Dooley immediately knew this to be the recently-absconded Eddie's and that, while he was sometimes over-generous with his money, this was not one such occasion. He promised he would see the money returned safely to it's owner and ventured outside wondering how exactly he would manage to profit from the fact that, not only had Eddie left forty five euro at the bar, but Joe may also have left a few euro behind him. He had only seconds to devise his plan before being greeted by both of these men as well as Johnny and whatever gang he had with him.

For this reason, Dooley was incredibly happy to realize that Johnny was not outside. Eddie, the chief idiot out of the pair, was not even sitting at the bench with Joe, but a couple of benches behind engaged in conversation with a couple of girls unfamiliar to Dooley. He smiled to himself.

Dooley sat at the bench with Joe who was happy to finally have some company. Small talk was casually exchanged as Dooley wondered who Eddie was talking to. Joe claimed to know nothing except that he had been over there since he came out and he was as much in the dark as Dooley. He told him he was afraid to turn around to look for fear he had to engage in some form of an exchange of pleasantries or light conversation. At this stage in the day, this was not Joe's strong point considering he was on a plane not 36 hours ago somewhere over the Atlantic. He had not slept in 48 hours before getting 5 hours the previous night and was on the beer again. He considered himself to be a hero among men at this point.

Dooley had reason to suspect that he wasn't.

"Oh Joe, I think you might have left your change at the bar," Dooley stated, with more than a little uncertainty in his condescending tone. "Did you hand in a tenner for your pint and then walk off without the change?" he asked, much more assuredly this time, getting his tones of voice mixed up between the two sentences. Joe stared into the distance for a number of seconds, reenacting the scene with the man collecting glasses and the socially-awkward-penguin-ness of it all before coming to the conclusion that he had done exactly that. Dooley laughed knowing this to be true and then Joe laughed. Dooley laughed louder, however, and had there been a casual observer, they would have noticed there was more to this story.

Dooley spilled forty five euro out of his sleeve, lowered his voice while continuing to laugh and told Joe "And... eh.... I think Eddie forgot his change too." They both laughed as Dooley recounted what had played out after Joe had left the bar. The fact that the two of them had forgotten change in a row was a story in itself and the fact that Eddie's was so much was a whole other one but there was another story that could yet be made given the circumstances they found themselves in.

"We have to mess with Eddie over this somehow, we can't let this go," Dooley mused, with no particular plan in his head. Joe agreed and offered to be the whipping boy for the greater good. They had almost no time to plan a strategy as Eddie returned to the bench all smiles. Calm and casual was the way the lads needed to play this. "So who were they anyway Eddie? I was afraid to look around," Joe spoke the truth, doing an admirable job of silencing the heightening excitement in his throat. Eddie claimed they were Mary's friends or housemates or something. "What are their names? Do I know them?" He hadn't a fucking clue. In typical Eddie fashion he had managed to bullshit his way through a ten minute conversation with them, not knowing either of their names. Dooley took a sip of his beer, proclaiming its deliciousness for all to hear beforehand and cutting his sip short as an important thought just popped into his head. 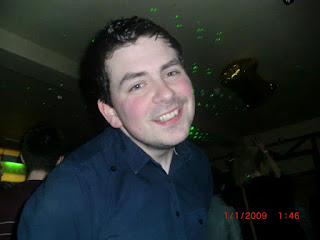 "Oh Joe," he said, more quizzically than before. "Did you... eh... did you forget your change at the bar?" Joe eyed him, wondering where he might be going with this. The wonder in his eyes was actually wondering if they were going for it now and how they would proceed as they had no time to rehearse. Dooley continued "Did you hand in a tenner for your pint and walk off without getting your change?" The realization in Joe's eyes was a carbon copy of what he had done a mere two minutes earlier as if he was hearing this news for the first time.

Eddie's hands clapped together and he began to laugh. Quite loudly. Joe laughed along and tried to explain his way out of it as best he could all the while paying attention to Eddie's reaction. He was laughing - obnoxiously. Dooley laughed too as Eddie uttered the words "Too much money is what you have, too much money." He paused long enough to laugh which was also enough time for Joe and Dooley to share a silent glance, one which said "No, it hasn't gone far enough yet." Eddie was getting into the swing of this now and was ready to hold this one over Joe for the rest of the night.

After nearly swinging back and falling off the bench, he pulled forward again and continued his tirade, only louder this time. "Too much money.... YA FUCKIN' EEJIT." This was enough for Joe and Dooley to burst into hysterics as Dooley let forty five euro roll out of his sleeve onto the bench. "Oh... eh... Eddie," Dooley said between gasps of air, "I think you forgot your change too - YA FUCKIN' EEJIT."