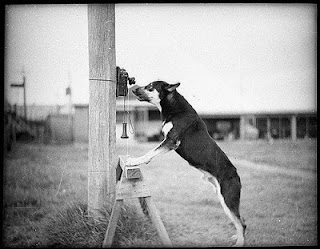 I'm not entirely sure what it is about me but I just have to assume that everyone is inherently evil and completely different to any other human being I've met, just because I haven't met them. Exhibit A: I had to make two phone calls a couple of weeks ago to people I had not spoken to before (we had emailed so that skipped the whole awkward Joel Donovan thing that would have inevitably happened) and I paced around the house nervously before making the first.

I wasn't afraid that this woman was going to be a complete bitch. Far from it, in fact. She was all too courteous and accommodating through electronic mail and "would be delighted to chat". Yet as I came to the climax of the dialing, the clicker clicked and the phone inside my phone where this woman lives began to ring, my heart was beating so fast that my tongue had the automatic reflex of hanging out of the side of my mouth. Why was I so nervous? I do not know, but you would pay good money for the quality of brick that I was shitting at the time.

She answered, I explained who I was and that we had corresponded through email already. She pulled me up mid sentence and says:


"Hey listen, Joel Donavan, or whoever the fuck you are, I have no time for you or people like you. Who the fuck do you think you are coming into my country and then having the stones to call me looking to ask me about my farm and any possible contacts I might have for you? You want to know something about my farm? It's mine, not yours so fuck off looking to find out shit about it. Do I know of anyone who might be looking to hire an Irish boy to pull their tits? I'm sure there's some very lonely, very wealthy women who would pay you to do that. Now I have a greenhouse full of tomatoes to spray and you've wasted enough of my time so go suck a fuck, you stupid little dipshit".

This entire conversation played in my head in the time it took the phone to bleep-bleeeep three times until the woman lifted the receiver on the other end - and she could not have been nicer or more engaging. She answered all of my questions (which were just a front for my real question - Can you find me a job?) eagerly and with the passion that you would imagine a woman farmer would have. She gave me another person to contact, I thanked her very much and told her I would like to visit her farm some time. She replied that she would be delighted and would love to talk about the differences that exist between farming in New England and old Ireland. How dare she ask anything of me.

On a roll now, I decided to dive straight into the next call, a man who "has his finger on the pulse of dairy farming in Massachusetts". I was much more terrified by this phone call because the only correspondence I had received from this man who, for all I knew, could be Satan on earth was a one line email which read:


Probably best if we have a conversation. I will be back in my office on Monday. 781-xxx-xxxx

It's a good job I already had his number because there's no x on my keypad. Except on the 9 button but that wasn't his number. The other thing that scared me was that his email address ended in .mass.gov. The conversation I was imaging here was:

Ah yes hello Mr. Donovan, I've been expecting your call. You said in your email that you are having trouble securing employment following a number of months of searching here in Massachusetts and you are turning to the agricultural sector? I see, well here is how this is going to go down. The simple fact is that you are an illegal alien, invading our country and attempting to steal jobs from hard working, blue collar, evangelical Christians who have earned a right to work here. Unfortunately for you, I am in charge of deporting aliens from our fair state. Rather more unfortunate for you *interrupted by knock on door*, that knock which you just heard is from two men who bear an uncanny resemblance to Tommy Lee Jones and Will Smith. They also share their job descriptions in that they sort out our alien problem. Good day to you, sir.

Instead of any of this happening, he seemed to identify with my plight, regaling me with the story of how he was unemployed in the 70s and would do anything for money. He didn't go into specifics but I would assume that he stopped short of soliciting sex for money. This assumption is based on no evidence whatsoever. He gave me a long list of people to contact, places to advertise myself, and even an Irish guy that might be of assistance. This conversation was followed up by a swift email offering even more help. Where does he get off?

Having had these two very pleasant experiences over the phone on the same day, I have progressed majorly through my fear of calling someone on the phone. There are a couple of things that I don't understand about this fear. Not only is it a fear of cold-calling, but a fear of luke-warm and warm calling too. I have no problem calling people I know well or have at least had a conversation with recently. I also have no qualms about answering the phone from anyone. Anything outside of that and I shit the proverbial togs. Why don't I realize that I have the power in my shittiest finger (pinky on my left hand - I never liked that little bitch) to end the conversation immediately if it isn't going the way I had hoped?


Does anyone else have this phobia?