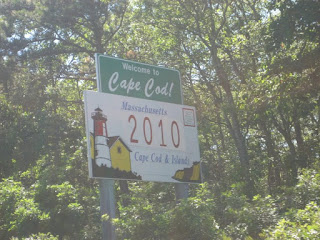 Holidays can very often fall apart on the most minuscule of things. Weekends away are very much the same, but depending on the mindsets of the individuals involved, these "most minuscule of things" can also, very often, come to be what the holiday/weekend away is remembered for. Whether it is remembered for better or worse is very often left to be disputed. With absolutely none of this in mind, myself and Christina set off down to Cape Cod for the weekend.

The original plan being to see the Saw Doctors and drink it up with all the Irish in their Mayo jerseys and any green items of clothing they could lay their hands on as they raced out the door. Their attempts at tailgating proved to be quite meek and very Irish in that they stood at the boot of the car "atin' sangwiches and dhrinkin' a few cans" before the show. We deduced all this as we drove around the car park in the vane hopes of securing a moderately-priced ticket-a-piece. When it became apparent that our chances were slimmer than your average American, our new Canadian friend, aptly named Liberty, took to playing fuck with the car park attendant, who clearly, and very mistakenly, thought he shared some form of a common bond with the shams that were about to take to the stage inside. 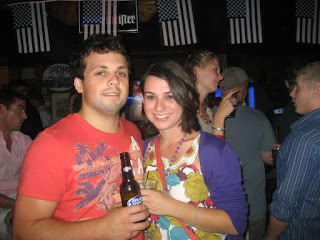 A pub crawl was in order. It wasn't so much a pub crawl as a restaurant tour as we had to drive between each restaurant that had a bar. We enjoyed ourselves, holding on to every snippet of information we heard about the bar/nite club/dive that would be our night out later on. It promised so much - and my God did it deliver. Pride would be an injustice to how I feel when I realise that I am a member of the wonderful Osterville Veterans Association Incorporated aka The Foxhole for the remainder of 2010. And all for a measly three dollars (which coincidentally would have bought me a bottle of Bud Light and I would have walked away from the bar with 3 coins in my pocket). I would liken the experience to cutting a quarter off Club K, moving it out the country, putting it underground, making it cheaper and more seedier, and filling it with the most diverse mixture of Barretts clientele that you would see on a Saturday night. I’m not finished. Add in the worse, most divisest arcade you have been to, and place the same kind of cocktail (rum punch) in all the ladies hands (and mine on occasion). This is the Foxhole ladies and gentlemen. Drama unfolded and people got drunk and were promptly minded by yours truly. America is changing me. 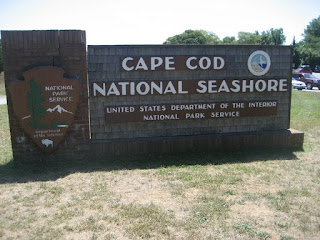 The next day we set off further into the Cape to get a flavour of it, safe in the knowledge that we had a motel waiting for us in Eastham. We even tried to check in early to to get that out of the way, but were told to come back. To while away the time until check-in, we rented bikes and cycled the trails. Truth be told, I was more impressed by the bike than the scenery, but the beaches were pretty spectacular and I’m sorry that I didn't have more time with them. I guess it’s a friendship that was never really allowed to blossom. We arrived back at the motel around 4 and set about checking in – a relatively easy task, one would think. Step forward Christina Tamer to request her room.

The old man at the check-in desk rifled helplessly through sheets and sheets of paper. Every one that did not hold the name “Christina Tamer”, brought an extra bead of perspiration to his brow. In our relaxed mood following our cycle, we thought nothing of it. The poor, senile, old man shouldn't have been working there in the first place – even if he did own the place. He transferred all responsibility to the kindly girl at the desk. She’d sort it out. And sort it out she did rather quickly. She looked up from her computer screen, her face wiped to that of a very caring doctor about to break sad news to the relative of a hospitalised loved one and, in the voice of a mother telling her child that, instead of making her child their favourite meal, they were to have broccoli and spinach instead, she uttered the words “I’m sorry Christina but it says here that you booked for the 21st”.

I looked at Christina's face. She looked like a spoiled child on Christmas morning, who had opened her present to realise that she had not gotten the Malibu Barbie with matching playhouse she had written to Santa for months previously, but instead she received Garbage man Barbie with matching dust bin. She couldn't speak, move, function. The world as she once knew it was now strange and unfamiliar to her. At times, she looked like she may have been the relative of the hospitalised loved one. The receptionist broke the silence by confirming just how wrong Christina was, as she backed away in horror not wanting to hear another word.

To those of you who wonder why getting the date wrong was such a big deal, I shall explain. The Cape fills up at weekends – Saturday nights especially. The odds of us finding another place to stay were, at best, very poor. We had no time to waste as we raced past scores of motels, hotels and B’n’Bs with no vacancy after no vacancy after saltwater pool….. Wait, what the fuck was that? Did that just say saltwater pool? Sick. If you want salt water get in the ocean.

The situation was looking decidedly bleak and I was on the cusp of suggesting we turn around, with our tails between our legs and enjoy another night in The Foxhole. Christina, not so easily deterred, the rejection of the motels seemingly making her stronger, soldiered on, gritting her teeth. A tourist information centre approached on the right, it was our one last hope, our white knight. This was it. 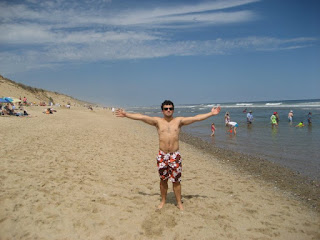 The atmosphere inside the tourist office was palpable – think (imagine if, like me, you don’t remember it) the moments leading up to Dave O’Leary’s penalty in a stadium in Genoa in 1990 – as Christina explained her predicament to yet another old man behind a desk. This guy reliably informed us that there were two vacancies on the whole Cape – and that was an hour ago. They may have been snapped up. Christina called the B’n’B that was committing lawful extortion and asked, begged, pleaded with them for their room. The foreign guy at the end of the line was only too delighted and, having secured directions that included the words “dirt track”, we set off.

A dirt track would have been one thing, but the path we were sent up resembled something more like a bog trail that hasn’t been used for a number of turf cutting seasons. A balding guy, sporting a rather unflattering moustache walked towards us as we spotted the first remnants of anything that resembled a house. Immediately, Christina knew this was the man she spoke with on the phone. The man in question was a clearly drunk, Swedish man. It wasn’t immediately clear that he was Swedish – he informed us of that later – but the smell emanating from his mouth would have been enough to knock a sizeable army of dogs. He led us through a jungle - that we later learned to be the garden, which had just been untended and unkempt for years - and into the cottage that was to be ours for the night.

What felt like half an hour passed as he told us about his sons, and his painting from his youth, as well as the fact that his wife well and truly wears the pants in what must surely be a very strange and twisted relationship. When he finally left, we quite obviously started talking about him and repeating much of the ludocris and quite frankly ridiculous things he said, only for him to burst back in the door again, oblivious to all that was being said. The reason for his blissful ignorance became apparent as he came into range. In the 20 seconds that he had disappeared, one could only assume he swamped a full bottle of hard liquor that was stored in a bush outside the back door. That was the only reasonable explanation I could arrive at, my eyes streaming from the fumes.

Another half hour elapsed as he showed us around the maps that he had in the house and left, only to return once more to tell us he had left towels for us. That was the last we were to see of him. Some of the photos of the place make it look infinitely more beautiful that it is, but looking past the fact that it was so ridiculously overgrown and the fact that it’s owner was a drunk, I really liked the place. The rest of the weekend passed off without incident. We spent a large chunk of Sunday at what Christina persisted with referring to as Macaroni (Marconi) beach. We went home, Chez Sven and its alcoholic owner being the highlight of the trip, all made possible by a silly and extremely simple mistake. Who says they're such a bad thing?
Email Post
Labels: America Cape Cod Stuff travel